Home » Elder Law » How Would You Feel about a Robot Caregiver in the Future? 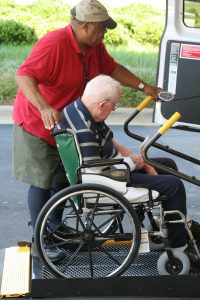 The number of older Americans has grown significantly in recent years and experts tell us it will more than double from the current 46 million to over 98 million by 2060. Given the fact that we are already struggling to provide care to the number of elderly individuals that need it now, concerns about who will care for the elderly in the future seem warranted. One idea that appears to be gaining momentum is robot caregivers. Yes, even the field of healthcare is taking advantage of the leaps in science and technology that have occurred in recent years. How would you feel about a robot caregiver in the future? A recent survey asked people that question. You may find the answers surprising – or maybe not.

The Need for Quality Care

By the year 2060, the 65-and-older age group’s share of the total population will rise to nearly 24 percent from its current 15 percent. A significantly longer life expectancy, coupled with the fact that the Baby Boomer generation is now moving into retirement, has created the current boom in the elderly population and corresponding need for additional caregivers. Although you may not be aware of it, the use of robots are caregivers is something that has gained momentum in recent years. To find out how Americans feel about the idea of robots providing care, they conducted a survey.

How Do Americans Feel about Robot Caregivers?

To gauge how the average American feels about the idea of robot caregivers, respondents were asked to read and respond to the following scenario:

“Today, many older adults move into assisted living facilities when they can no longer live independently. In the future, people could be provided with a robot caregiver that would allow them to continue living in their own home as they age. This robot would be available 24 hours a day to help with household chores, test vital signs and dispense medication, or call for assistance in an emergency. It would also have conversational skills and could serve as a companion for people who live alone.”

After reading the passage, the respondents were asked a number of questions about it that were intended to indicate how they felt about the concept of robot caregivers. Some of the answers may surprise you. One that likely doesn’t come as a surprise is that a majority of Americans are unfamiliar with efforts to develop robot caregivers for the elderly: 65 percent say they have heard nothing at all about this topic, and only six percent have heard a lot about it. Although fewer than half of Americans are aware of the effort to develop robot caregivers, a majority (59%) view them as a realistic prospect – with 10 percent describing this concept as extremely realistic.

A majority of Americans (59%) also said they would not be interested in a robot caregiver for themselves or a family member if given the opportunity; however, 41percent say they would be interested in a robot caregiver if they had the chance. Among those who would like to use this type of robot caregiver, a number of different motivations were mentioned. Around one-in-five (21%) feel that a robot caregiver would provide a better quality of care than is available today, especially in comparison to paid human caregivers. Specific comments from respondents shed more light on how they feel, including a 43-year-old-woman who commented that “A robot would never fatigue, would never get emotional or angry. They have no ego, they would just care for the individual.” A 28-year-old woman added, “I used to work in nursing homes and assisted livings. Human caregivers are often underpaid and overworked. Humans have bias, and if they don’t like a patient that affects their care.” Another respondent compared the idea of a robot caregiver to relying on family members, commenting that “It would give dedicated, reliable care – whereas family members often have jobs and other obligations that keep them from being able to serve as around-the-clock caregivers. It also takes away the uncertainty of a stranger coming in and you not knowing what kind of care your family member may get.”

A smaller number of respondents (15%), felt that this type of robot would help older adults be more independent and remain in their homes for a longer period of time. Comments supporting this line of thinking include:

“A caregiver of this type would have allowed my family to leave my mother in her home and not have her move into an assisted living facility. A robot would have provided the assistance she needed while allowing her to have privacy in her home.”– 57-year-old woman

“Anything that promotes the independence of the elderly individual may be useful in a society where the extended family is increasingly distant or separate.” – 46-year-old woman

“Long term care is very expensive and most nursing homes are not where older people want to be. People like to stay in their own homes.” – 68-year-old woman

Of the respondents who would not be interested in a robot caregiver, the most commonly mentioned reason, by far, was that trusting their loved ones to a machine would cause them to lose out on an element of human touch or compassion that can never be replicated by a robot. As one 47-year-old woman commented, “Human contact is vital. A robot cannot provide the personal chemistry, empathy, and meaningful relationship that a human can, especially to someone in physical and emotional need.” Another 71-yeard old woman expressed her concern by saying “We need to guard against increasing the lack of one-on-one interactions. As a retired person I am aware of the growing isolation with automated phone systems, checkout lanes, online shopping, as well as incessant robocalls causing us to avoid answering a ringing phone!!!” An additional 12 percent of respondents were concerned about the chance that robots might make a mistake in caring for their loved ones, and another 6 percent argue that caregiving is a job for family and loved ones and should not be outsourced to a machine. For example, a 48-year-old woman said that “It would depend on how reliable the robot is. The main problem with the elderly is that they get confused. If the robot malfunctions, an elderly person would not be able to manage that situation adequately.” One respondent simply stated that “Family needs to be taken care of by family. It’s part of our responsibility.”

For more information, please join us for an upcoming FREE seminar. If you have questions or concerns about elder law issues, contact the experienced elder law lawyers at Augulis Law Firm by calling 908-222-8803 to schedule your appointment today.